One attic , 4 guys with an unusual idea and 2 years of perseverance and meetings on Tuesday. 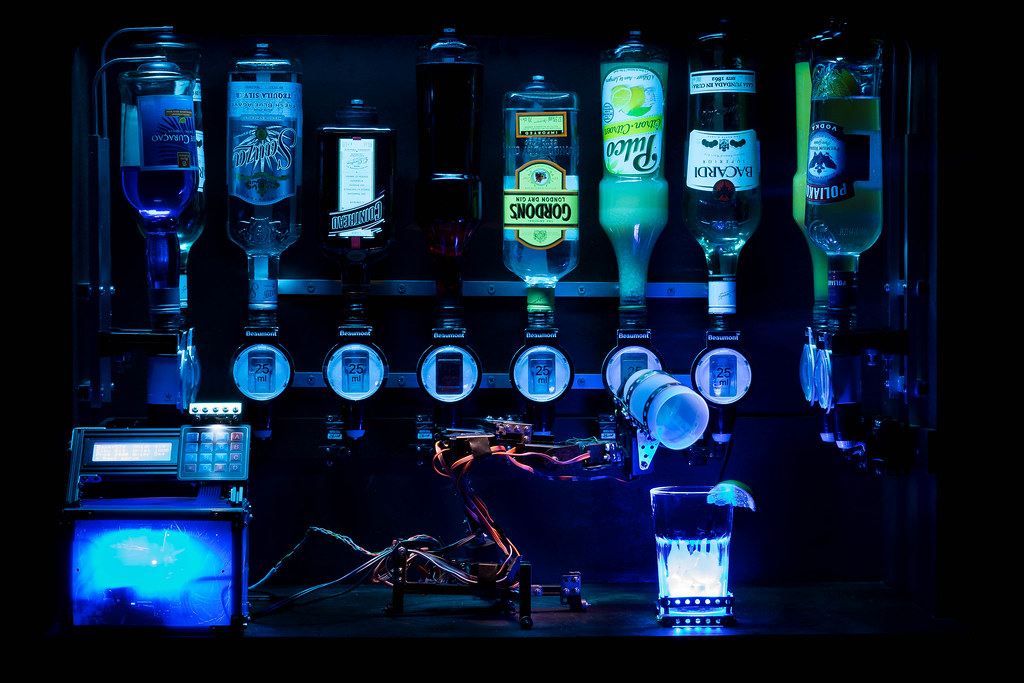 I met Nick through our 5 year old’s school “posse”, we are “the dads”. We seem to be sharing the same geeky interests and when he first told me about a project that he and his friends were working on I was intrigued to go and meet Winston. Later I learned that that they wanted to launch a Kickstarter campaign and because I like a good challenge …. I proposed to pimp their product shots.

Winston is the most unusual thing I ever photographer and that posed a couple of problems.

Before – After
Let me jump right in and show you the before and after. I’ll dive in to the technical details further down.

These are some of the snaps that the guys had made. (They are still on the kickstarter page to show the real basement project feeling of it)

Room for improvement … no critique on the guys because I wouldn’t be able to create a robot arm either. First thing we did was to switch out the test bottles for the real deal.

Before
My test shot with the available light as it was. Better? but not nearly there… 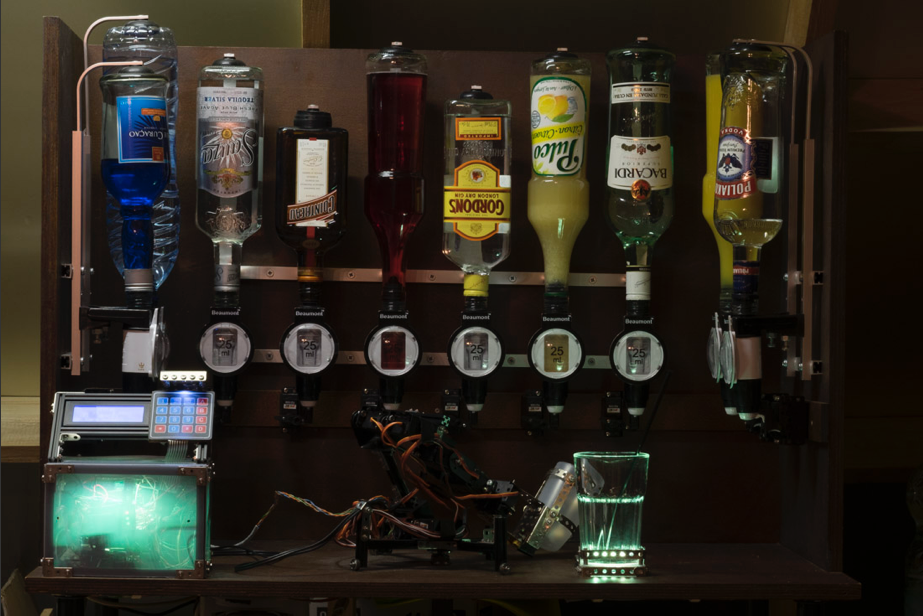 After
(click on the pictures for a full screen view.) 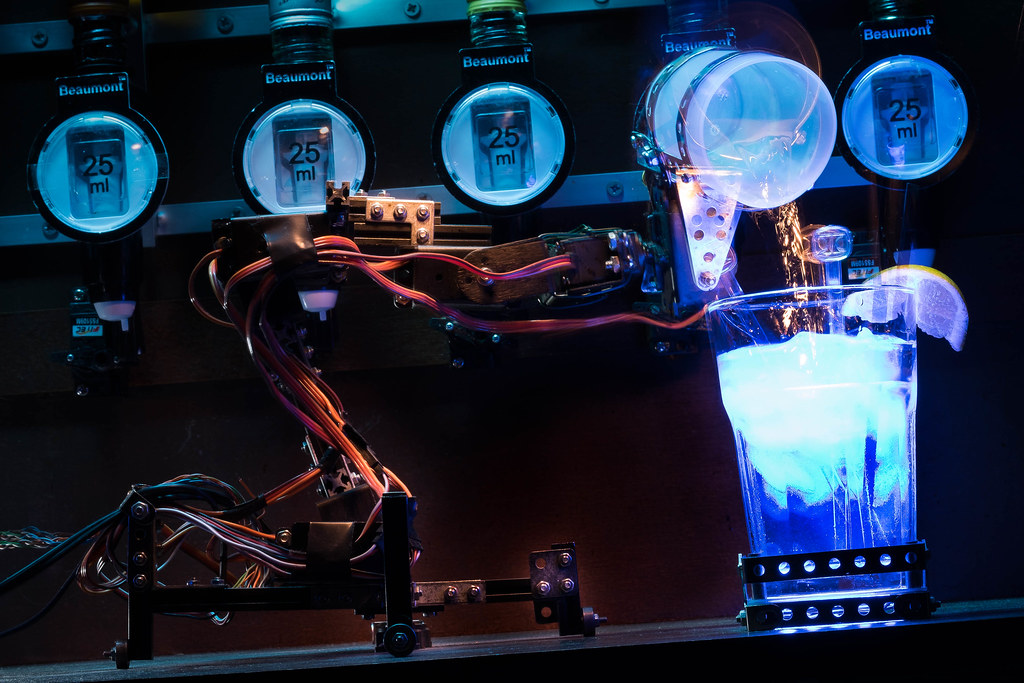 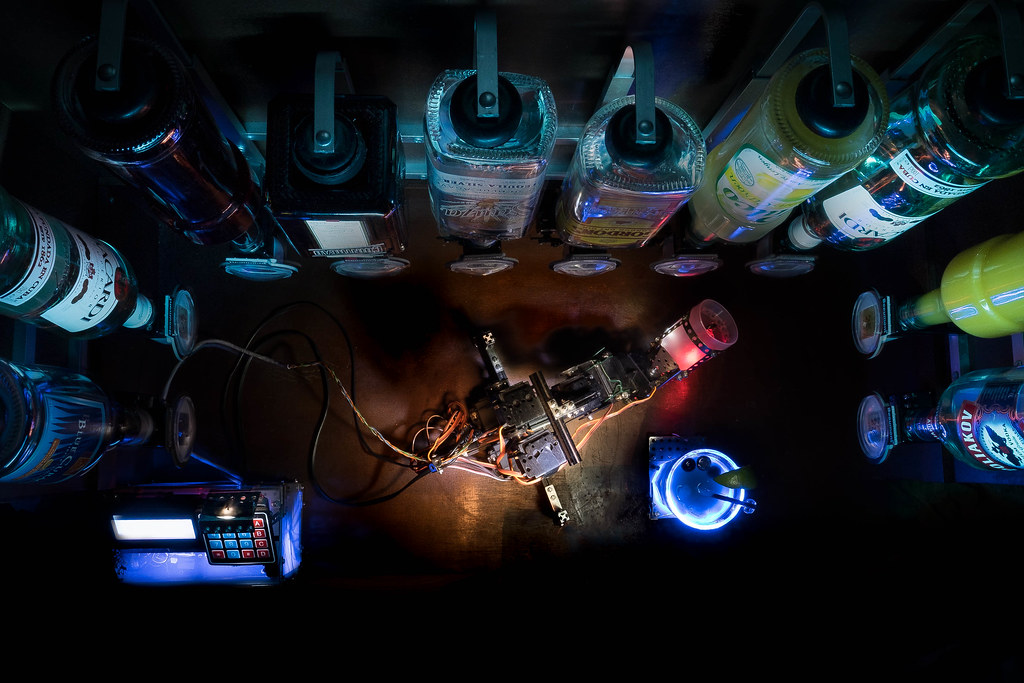 Using a softbox & flashes to light Winston would cause me too many headaches with all the reflective materials. It would also be very difficult to light the bottles and the robotic arm separately without having too much stray light on the wooden panels of the device.

We gaffered up the windows to block out any remaining daylight from entering and killed the TL & tungsten. To accompany the colored LEDs that Winston has in the console & underneath the fluid recipient area AND to get that coyote ugly cocktail bar vibe I opted to use a blue gelled LED panel. The camera was set to ISO200 and F11 (for lots of detail) and I chose a long exposure. Using a long exposure for reflective surfaces washes out most of the specular highlights you would normally get when you would use a single short burst of light.

Our single exposure was created in two steps:

We experimented with shutter times from 4 to 10 seconds and the only trick was to time our movements a bit. It took us about 20 for each setup to find a good balance to light everything the way we wanted to. Being able to review your work on a computer monitor is essential.

Gear
Camera: Fujifilm X-T1 mounted on a tripod and tethered to Lightroom via a plugin.
Lens: Fujinon XF 56mm
Light: An ebay LED panel with a blue frosted gel

Post processing
Minimal really.. some basic dodging & burning for the black areas. And I merged part of another picture to get a good exposure on the console & the cocktail glass. (Winston his LEDs have a life of their own)

So guys, that’s it. I hope this has been useful to some of you. I never did any sponsored posts but I really hope you take some time and go check out Winston on Kickstarter. Even if you only the SparksNCave crew for 5$ you’re helping them to reach their goal. And maybe someday, you’ll find yourself in a bar or on an event talking to your friends standing around Winston while he is serving you a cocktail. You’ll have a good story to tell!